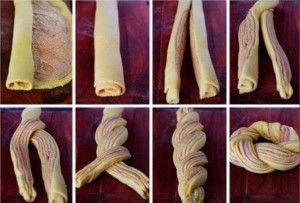 Nothing better than the smell of baking cinnamon bun.

Method:
Mix the yeast and sugar with the lukewarm milk and let it sit a few minutes while the yeast bubbles and foams up.
Add the egg yolk, the melted butter, the flour and the salt, then knead the dough and shape into a ball.
Place the dough in a large, greased bowl, then cover and place in a warm space and let rise until doubled in size (about 1 hour).
Preheat oven to about 400 degrees Fahrenheit. Dust your work surface with flour, and roll the dough out to a thickness of 1cm.
Spread the melted butter across all of the dough, then sprinkle the cinnamon and sugar mixture.
Roll up the dough, and using a knife, cut the log in half length-wise.
Twist the two halves together, keeping the open layers exposed as described in the photo tutorial. Give a round shape, then transfer to a baking tray (buttered or covered with cookie sheet).
Top the remaining butter and sprinkle some sugar and cinnamon mixture. Bake for 30 to 35 minutes, until the top is golden brown.
Reduce the oven temperature to 350 degrees Fahrenheit after 5-10 minutes to stop it burning. Top with icing sugar mixed with water if you want, just sprinkle some sugar, or eat it like this.